The race for the title in the Korea Baseball Organization has become more interesting in recent weeks. Top team NC Dinos struggles with only a couple of games left in the KBO season. According to NC Dinos betting reports, the team lost six games in a row.

It was the worst losing streak for NC Dinos this season. They were shut out two times during the skid. As a result, their lead was reduced to 4.5 games over second-placed KT Wiz. Both teams have 13 games left before Wednesday.

At present, only two points are separating KT Wiz and fifth-placed Kiwoom Heroes. In third and fourth place are LG Twins and Doosan Bears. The Dinos are the best hitting team this season. However, their hitters suffered a slump this month with a batting average of .252. As a result, they are ninth out of ten teams. 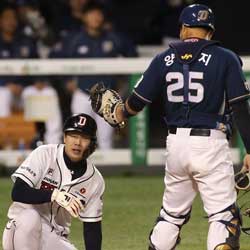 Aside from their batting woes, the Dinos’ pitchers were having troubles as well. Their starting pitchers ranked dead last in the KBO in October. Also, they allowed 67 hits with an ERA of 6.28. They are missing the services of their ace, Koo Chang-mo.

According to sports betting picks reports, Koo has a 9-0 record this season but injured his arm in July. He hasn’t returned to active duty since then. The rotation managed to keep up without their ace. However, they showed some cracks in recent weeks.

Based on sports betting odds experts, Mike Wright is not performing well in the late-season. He had 13 innings of one-run ball in his last two starts in September. Also, he gave up 19 earned runs in 11 innings in October to lose all his three starts.

Also, Wright gave up nine runs in 1 2/3 innings last week. Opponents got 16 hits from him in his previous five innings.