It’s a draw for Gangwon FC and Pohang Steelers match

It seems like April is the month for matches ending in draws for Gangwon FC. In fact, they recently ended a match in a double zeroes against Pohang Steelers. Both teams scored 0-0 in the KEB Hana Bank K League 1 2018 10th round.

The game with Pohang Steelers was held at Chuncheon Songam Sports Town Main Stadium. Needless to say, no matter the efforts from both teams, no one emerged victorious over the other. Both failed to score in the match.

What’s next after the draw for Gangwon FC? 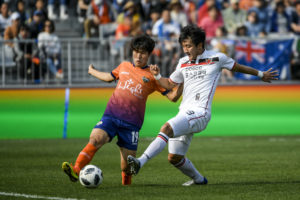 So far, Gangwon has a total of 13 points in the games. In total, their track record has 4 wins, 1 draw and 5 losses (13 points). These numbers essentially put them near the bottom ranks. They are currently in the eighth place in the league.

The case is different for Pohang Steelers who has managed to secure a no. 5 ranking. In order to climb up in the league, Gangwon FC will have to defeat Ulsan Hyundai that is currently in 7th place.

Doing so will also allow them to defeat other teams with higher ranks. Whether they succeed in going on an upward spiral remains to be seen.

At this point, it is speculated that a point could have changed it all. It could have allowed them to take a leap over the middle level. This essentially gives them a chance to get to the top. In the midst of a counterattack situation, goalkeeper Lee Bum-young’s defensive effort was blocked by the opponent’s attack.

During the second half, Gangwon added Zelic and Valentinos to further strengthen the offense and defense, but failed to open the opponent’s goal despite attempting 16 shots (six shots).

Moreover, on the 43rd minute of the second half, the opponent, Kwon Wan-kyu, stepped on Kang Won-ee’s knee. This created a dangerous scene for the team.

Despite individual and collaborative efforts, Gangwon wasn’t able to make a score. The team failed to race against time to make a score that could have changed their odds in the league.