Jeonbuk Stays in the Running for the K League Title

Jeonbuk Hyundai Motors drew against Pohang Steelers at home last Monday. As a result, Jeonbuk stays in the running for the K League 1 title. Also, they are hoping to win their sixth straight title.

After the draw, Jeonbuk now has 50 points for the year. Ulsan Hyundai FC is still in the lead with 59 points with ten games to go in the season. Also, the two top teams have a game against each other before the season ends. Jeonbuk Hyundai Motors betting fans are looking forward to that match.

Jeonbuk won its last three K League 1 titles against Ulsan. However, according to Korean sportsbook reports, the latter suffered from late-season meltdowns in the past. Also, Jeonbuk can overcome the nine-point lead.

Jeonbuk Stays in the Running 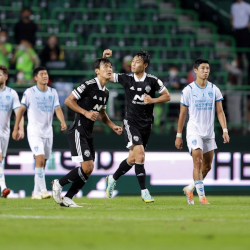 According to people who bet on sports, the 2-2 draw last Monday was exciting. Jeonbuk was coming from a defeat against Urawa Red Diamonds at the AFC Champions League last Thursday. Also, it was the team’s third extra-time game at the AFC tournament.

Thus, Jeonbuk players were unprepared mentally and physically for the Monday match against Pohang. As a result, some starters began the game on the bench. Both teams failed to score in the first half.

Pohang scored two goals in the first four minutes of the second half. However, Jeonbuk scored its first goal in the 54th minute. Then, they scored the equalizer at the 85th-minute mark.

If Pohang won, they could have moved closer to Jeonbuk for the second spot. However, after the draw, they remained five points behind with 45 points. Incheon United is in fourth place with 44 points.

On the other hand, Ulsan drew with Jeju United last Saturday. Thus, it left the door open for Jeonbuk to reduce the lead.