The South Korean women’s national football team has more time to prepare for the Women’s Olympics football qualifiers against China. The Asian Football Confederation rescheduled to qualifying matches to February of 2021.

According to National Football Team betting sources, both South Korea and China proposed to hold their Olympic qualifiers on February 19 and 24. Winner of the series will gain a spot at the delayed Tokyo Olympics.

The two teams were supposed to play against each other last March 6 and 11. However, the coronavirus pandemic profoundly affected both countries. As a result, the AFC postponed the matches to June 4 and 9. 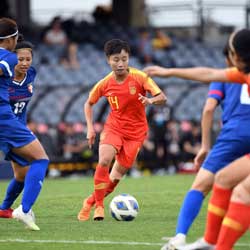 After the postponement of the Tokyo Olympics to next year, China and South Korea started discussing new dates for the football qualifiers. Both countries would have sufficient time to prepare for the two games, according to a sports forum.

The winner of the two-game series will qualify for the Tokyo Olympics. Australia and Vietnam already completed their qualifying series, which the former won 7-1 in aggregate. As a result, Australia took a spot in the 2021 Olympics.

According to sports betting sources, South Korea is 18th in the world. It is three places below China. In their 37 encounters, China has the upper hand with 27 wins, six draws, and four losses. The South Koreans want to be the first women’s team to represent the nation in the Olympics.

Women’s football event became an Olympic sport in 1996. South Korea has never played in the competition since then.

Aside from Australia and host Japan, the other nations that qualified for the women’s football event in the Olympics are US, New Zealand, Brazil, Britain, Sweden, Zambia, Canada, and Sweden. The event would have 12 teams and would start before the opening ceremony of the Olympics.