After Pohang Steelers’ defeat in the Asian Champions League Finals match, South Koreans will focus on K League 1. They lost to Al-Hilal 2-0 in the finals. Both teams had three AFC Asian Championship titles, each going into the game, which was the most in the tournament.

However, Al-Hilal now holds the record for most titles in the Asian Champions League after winning against Pohang Steelers. Pohang Steelers betting fans expected their team to lose because Al-Hilal had several famous national players.

However, fans were still disappointed about the Steelers’ performance. They allowed Nasser Al-Dawsari to score 16 seconds after kickoff. According to the best gambling websites, the goal stunned the Steelers. Also, Moussa Marega scored the second goal for Al-Hilal in the second half. 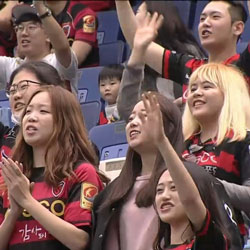 At present, Pohang will focus on K League 1. Also, the team is in seventh place. As a result, they are already out of the running for the title. On top of the standings are Ulsan Horang-I and Jeonbuk Motor. The latter won against the former for the K League title in the last two years. In addition, the two teams entered the weekend with 70 points.

Jeonbuk won against Daegu FC, with Hong Jeong-ho and Moon Seon-min scoring a goal each. As a result, it pressured Ulsan to win their match. However, according to real time sports betting experts, the Ulsan vs. Suwon game ended in a draw.

It was a frustrating afternoon for Ulsan. Suwon’s goalie blocked Lee Dong-gyeong’s penalty kick in the first half. Then, the officials disallowed a goal after VAR saw an offside. Coach Hong Myong-bo said his players were under a lot of pressure.

With one game remaining, Ulsan is only two points behind Jeonbuk. However, Jeonbuk has the better goal difference.