Son Heung-min Scores his Tenth Goal of the Season

Son Heung-min is the pride of South Korea when it comes to playing football overseas. This is because he is currently playing in the English Premier League for the Tottenham Hotspur. Therefore, it is not a surprise that Korean football betting fans are keeping a close eye on him. Yesterday, they were quite happy with his success abroad as Son Heung-min Scores his Tenth Goal of the Season.

According to football news, the Korean football star made the goal in the thirteenth minute against Arsenal FC. The shot was made from the outside left corner of the box leading to a right-side of the net goal. Furthermore, he also set up another goal for his teammate leading to a 2-0 victory at the Tottenham Hotspur Stadium. 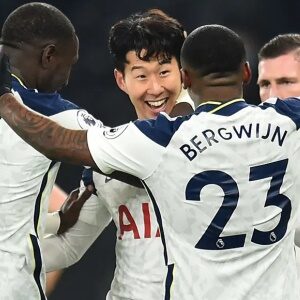 For Son Heung-min, this is a definite milestone in his career as a professional footballer.  This is because it is his fifth consecutive season with double digits in goals. In addition, he is only the third Tottenham Hotspur player to accomplish this feat. Thus, he now joins Robbie Keane and Harry Kane in this exclusive club.

Son Heung-min is also closing the gap as the leading scorer in the Premier League this season.  This is because he is just one goal behind Dominic Calvert-Lewin of Everton FC.

At the moment, Son Heung-min now has 13 goals under his belt this season from his overall competitions. In addition, 3 of these goals came from his performance at the EUFA Europa League. According to sports betting odds statistics, these 13 goals came from 17 appearances on the field.

This season Son Heung-min is hoping to break his record of 21 goals in 47 matches during the 2016-18 season. If he can keep this up, he is sure to break that record.

Bet on Football with VOBET, the official Korean sportsbook partner of Hamburger SV