In a disappointing turn of event for Korean football fans, South Korea Losses Bid to Host the 2023 Asian Cup. The Asian Football Confederation (AFC) Cup is a quadrennial international men’s football championship in Asia. Originally, China was to host the 2023 AFC Asian Cup. However, last May they made an announcement that they would not host it due to the COVID-19 pandemic.

This in turn led to the AFC having to find a new host country in a hurry. Thankfully for the AFC, South Korea, Indonesia and Qatar each put a bid to host the event. However, Korea and Indonesia fell short in their bid and lost to Qatar.

According to football betting websites, the announcement was made today by the AFC Executive Committee after a meeting in Malaysia. 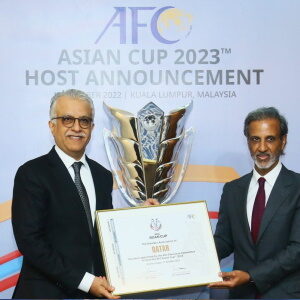 Football is the most popular sport in the world with 3.5 billion fans worldwide and 800 million fans in Asia. In China claims the most fans with 187 million while the United Arab Emirates has the highest percentage of fans.  Needless to say, hosting the tournament is a good source of money and prestige for the host country. Furthermore, the event will also bring millions of dollars of online sports betting revenue when it takes place.

According to sports news, one of the most likely reasons why Qatar was chosen is because of their current infrastructure. Since they are hosting the 2022 World Cup in November, hosting the 2023 Asian Cup will not be a problem.

Qatar has built seven new stadiums and upgraded another around the capital Doha to host the 32-team World Cup. Not only are the stadiums ready, Qatar will also have a lot of experience hosting a football event. South Korea on the other hand, has not been the host for the Asian Cup in 63 years.

AFC President, Sheikh Salman bin Ebrahim Al Khalifa, said Qatar is ready to put on the event. Despite the short time to prepare, he is confident they will be ready on time. He said that “Qatar will stage a worthy spectacle befitting the prestige and stature of Asia’s crown jewel”.

According to the Korean Football Association (KFA), Qatar’s strong bid package caught South Korea by surprise. Therefore, they were unable to match its their financial resources.  The statement by the KFA said they had “a tough battle against Qatar, with their abundant financial, human and material resources”.

Bet on Football with VOBET, the Official sponsor of Hamburg SV\