Reigning champions Jeonbuk Hyundai Motors is trying to take the top spot in the K League 1 standing. However, its mission took a hit after losing to Incheon United 3-1. It was the first time since March 2018 when Jeonbuk lost to Incheon. Thus, Ulsan extends lead in K League.

It is good news for Ulsan Hyundai betting fans. As a result of Jeonbuk’s defeat, Ulsan remained on top of the standings. Also, it was a tough loss for Jeonbuk because they had 70 percent of the ball possession. Thus, it showed that possessing the ball doesn’t always lead to a victory.

According to iGaming Korea reports, Jeonbuk’s Song Min-kyu scored the first goal in the 14th minute. However, Incheon’s Hernandes Rodrigues scored the equalizer 15 minutes later. Incheon got its second goal via Song Si-woo in the second half. Finally, Hernandes scored the last goal for his team. 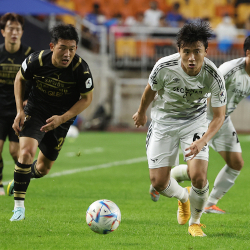 The referee waved off Kim Bo-kyung’s goal because of a handball violation. After that, both teams failed to score a goal. At the end of the match, Incheon took three points against Jeonbuk.

Players who bet on football said that Jeonbuk failed to create scoring opportunities. On the other hand, Incheon often penetrated Jeonbuk’s side and got many shots on target. As a result, Incheon went up to 4th place. Jeonbuk remained in second place with six points ahead of Pohang.

The 3-1 defeat was a bad indicator for Jeonbuk. Also, the team will try to win its third AFC Champions League title this week. They will play against Daegu FC in Japan on Thursday.

On the other hand, Daegu failed to add three points during the weekend after losing to Ulsan 4-0. It was a lopsided match, with Ulsan getting 69 percent of the possessions.