The Pittsburgh Pirates lost 16 out of their last 19 games in Cincinnati. Thus, they will try to complete the four-game Pirates vs Reds series sweep on Wednesday.

The Pirates won the first game Monday 6-3. Then, their bullpen came out strong to help the team win the doubleheader on Tuesday. People who bet on baseball are expecting Pittsburgh to complete the sweep. 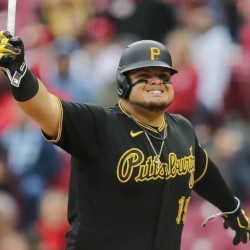 Roansy Contreras will start for the Pirates for the final game. According to baseball betting experts, the right-hander has an ERA of 3.29. Also, it will be his 15th start for the team this year. Also, it is his second one against the Reds.

Contreras’ first game against the Reds this season was on July 7. It was the first of a doubleheader where he held Cincinnati to a single run on four hits in more than six innings. Also, he struck out seven and walked one to help the Pirates win 4-2.

In the game against St. Louis, Contreras held the opponents to a single run on four hits in more than five innings. It was his fifth win of the season.

On the other hand, Cincinnati will go with Nick Lodolo. The rookie left-hander has been the most consistent pitcher in the rotation. However, the team doesn’t have the choice because rookies Graham Ashcraft and Hunter Greene have been on the injured list since August.

Outfielder Jake Fraley passed concussion protocols after Mann Banuelos of the Pirates hit him with a fastball. He will be available for the game.

Our baseball betting pick is the Pirates. They will sweep the series due to solid pitching. Also, Cincinnati lost five games in a row.

Bet on MLB games with VOBET, the best sportsbook in the world!