Ariel Miranda broke the Korea Baseball Organization record for the most strikeouts in a season. As a result, the left-hander leads the KBO MVP race. Also, there are only a handful of contenders as the regular season is coming to an end.

According to Doosan Bears betting fans, Miranda improved his chances of winning the MVP title after becoming the strikeout king in the KBO. The Cuban pitcher had four strikeouts in the game against LG Twins to earn a total of 225 for the year. Also, he overtook Choi Dong-won, who previously held the record of 223 strikeouts during the 1984 season.

Miranda is also the leader in ERA with 2.33. However, he failed to earn a Triple Crown because he is only second in wins. He is two wins behind David Buchanan, but there’s only time for one more start in the season. 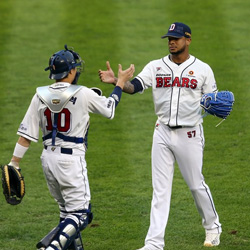 According to Korean sports betting sources, Miranda would be the first pitcher to win the MVP title without leading the KBO in wins. Thirteen pitchers have earned MVP honors in the KBO. Also, all of them led the KBO in wins.

Buchanan is playing for the Samsung Lions, which has a better record than Doosan Bears. However, he is not the better MVP candidate. He is fifth in strikeouts and ERA. Also, he is second in ERA in his team, with Baek Jung-hyun in first place with 2.57 ERA.

Also, Buchanan is splitting his Most Valuable Player votes with teammate Oh Seung-hwan. Oh earned his 40th save last October 13. Also, he is the oldest pitcher with at least 40 saves in a season.