The Korea Baseball Organization season will restart on Tuesday after an Olympic break. However, some off-field scandals took place during the break. For instance, the Kia Tigers released pitcher due to drug charges.

The second half of the 2021 KBO season will start on August 17. According to sports wagering reports, ten teams will have games during the first day. However, many Kia Tigers betting fans are more concerned about issues away from the field.

The Tigers released Aaron Brooks after customs officials discovered traces of marijuana in the vape items the right-hander ordered online. It is Brooks’ second season in the KBO. Also, he said that he was aware marijuana was a banned substance in South Korea. 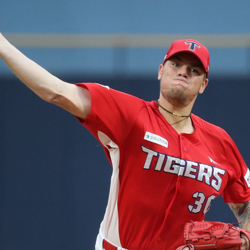 Brooks has a standing of 3-5 in thirteen starts this year. Also, he has an ERA of 3.35. Last season, he had a record of 11-4 with an ERA of 2.50 in 23 starts. However, the Tigers had to release him after his drug scandal. The pitcher said that he didn’t know the product he ordered contained an illegal substance.

Another scandal that rocked the KBO involved the Kiwoom Heroes. Police investigated Song Woo-hyun for drunk driving. According to sports news reports, the outfielder crashed into a tree while driving intoxicated last Sunday night. Also, he reported the incident the following day. Song was alone in the vehicle. In addition, he didn’t suffer any injuries.

Police investigated the incident. Also, they summoned Song for questioning. Song batted .296/.370/.416 in 69 matches in his first season in the KBO. In addition, he is the son of KBO legendary pitcher Song Jin-woo. His father is the career league leader with 210 wins, 3,003 innings pitched, and 2,048 strikeouts. Likewise, the Heroes are already dealing with suspended pitchers who violated social distancing rules.