Lee Jung-hoo is KBO Best Player for May

Kiwoom Heroes slugger Lee Jung-hoo is KBO best player for May. The Korea Baseball Organization said that Lee got 18 out of 32 votes from the media and more than half of the votes from fans. Thus, he finished with 55.94 converted voting points. In second place is KT Wiz’s Kang Baek-ho with 25.81 converted points.

In May, Lee hit .451/.525/.695 in 22 games. Also, he had one homer, sixteen extra-base hits, and 21 RBIs. Lee was the KBO leader in batting average and hits, second in runs scored, and on-base percentage. In addition, he is fourth in slugging percentage.

Kiwoom Heroes betting fans are happy that Lee shook off his bad start to the season. In April, Lee batted .269/.373/.344 with six extra-base hits. He had two hits in 12 games out of the 22 games in May. During the period, he had five three-hit games.

KBO Best Player for May 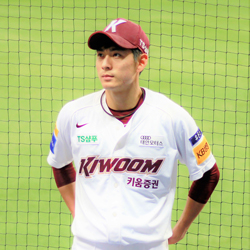 According to online sports wagering reports, the Kiwoom Heroes started the season without Kim Ha-seong, who is now playing for the San Diego Padres. However, the good news is that Lee Jung-hoo stepped up to become the team’s offensive leader.

Lee was the team leader in hits in 2020. He came in second to Kim in RBIs. Thus, there’s no surprise that he is the team’s go-to guy when they need runs. According to betting odds experts, the Heroes never won the KBO title. However, they have been in the playoffs in recent years. They only missed the playoffs once in eight seasons. Therefore, fans expect them to qualify for the playoffs this year.

At present, the Heroes have a 26-28 record. They are 4 1/2 games behind the leader SSG Landers. Also, their next game will be against Hanwha Eagles. The latter is having a bad season. Thus, they are second to the last in the standings.