South Korean baseball team LG Twins signs MLB pitcher Andrew Suarez. The 28-year-old lefty will play at the Korea Baseball Organization next year. According to LG Twins betting reports, Suarez’s contract is worth $600,000. He will earn $400,000 in salary and a $200,000 signing bonus.

Suarez made his Major League career with the San Francisco Giants in 2018. It was three years after the team drafted him in the second round of the MLB draft. Also, he had 56 games in three seasons that included 31 starts. He had a 7-15 record with an ERA of 4.66. He earned seven wins during his debut season.

Before the announcement of the deal, there were rumors that the Twins were negotiating with the pitcher. Suarez will join his former Giants teammate Casey Kelly in the LG Twins rotation. Kelly recently signed a $1.4 million contract with the Twins to return for a third season.

After selling Suarez’s contract to the Twins, the Giants have room for catcher Curt Casali. The team signed the catcher with a one-year contract. 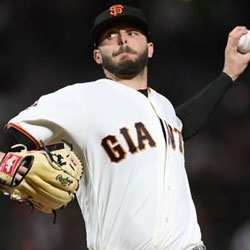 Based on online sports wagering sources, his fastballs have an average speed of 147.9 kilometers per hour. He is in the top five in the league when it came to average fastball speeds last season.

The Twins filled up its foreign players’ positions during the offseason. They are the seventh KBO team to do so. Aside from the two former Giants, the team also re-signed Roberto Ramos. Among the KBO team, only the Doosan Bears, Kiwoom Heroes, and NC Dinos have a spot for a foreign player in their rosters.