According to baseball betting news, Ryu Hyun-Jin Suffers a Glute Strain Injury and had to leave the game early. Yesterday the Toronto Blue Jays won against the Tampa Bay Rays in a 1-0 victory. While this baseball game did turn into a victory for the Blue Jays, it came at a price.

Before he left the mound, Ryu threw 62 pitches and 43 strikes. During these pitches, he let three players hit, had one walk, and had zero runs while striking out five players. The Blue Jays relief pitcher, Tim Mayza took over the game for him. 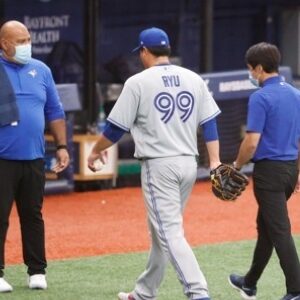 Sports News websites said that during the fourth inning, the superstar pitcher from South Korea had to leave the game. At the time, he felt uncomfortable but that he is now feeling better. During an after-game interview, he said that” It’s nothing serious” and does not believe it is an injury.

The Blue Jays will reevaluate his condition today but do not believe he will be put on the DL. The 34 years old Ryu is probably the most irreplaceable pitcher on the Toronto roster this year. This is because Toronto has seen a lot of injuries in their pitching roster this year.

They lost Kirby Yates for the year and both Julian Merryweather and Jordan Romana have spent time I the DL. Nate Pearson still has not made his debut but at least Steven Matz has been keeping the team alive.

Thus, Toronto is hoping that it is nothing serious. Especially since in 2014, he was on the injury list for 15 days while playing for the Dodger.

According to sports betting odds, Ryu has a current record 3.00 ERA/3.22 FIP in 4 starts and 24 innings. In addition, hiss average states are a little lower than normal. This is because he has a 48.6 groundball rate and his strikeout are down to a 21.9% strikeout rate.