In his first regular-season game in the KBO, Choo Shin-soo went hitless. However, he got a walk and stole one base. He went zero out of three with two strikeouts in the season opener against Lotte Giants.

The excellent news for SSG Landers betting fans is that the team managed to win without the former major leaguer’s help. They won 5-3, with both Choi Jeong and Choi Joo-hwan getting two home runs each.

Choo batted third for SSG Landers. Kim Won-hyong, Landers’ manager, said that Choo is still suffering from hip pains. Thus, Kim used him as a pinch hitter to prevent aggravating the injury. According to baseball and basketball betting experts, Choo is likely to play in the right field once he is 100 percent. Also, the team might need him in the left field from time to time. 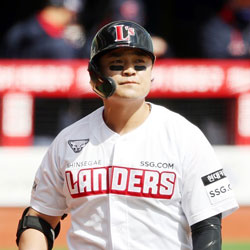 Choo struck out in his first at-bat against Dan Straily in the first inning. With two outs and bases empty, Choo looked at the first pitch. Then, Straily pitched two balls. He missed a slide to even the count. Then, Straily threw another ball for a full count. However, Choo failed to connect on a slider to strike out and end the inning.

According to baseball and basketball betting pick sources, Choo got back in the batter’s box in the third inning. There were two outs and a runner on first base. Also, Landers was already at the lead 1-0.

Choo looked at the first pitch go out of the zone for a ball. Then, Choi Ji-hoon stole second base. With the count at 2-1, Choo hit a line drive to center field. However, Giants Choo Jae-hyun caught the ball for an out.

His next at=bat was in the fifth inning. Straily walked Choo with no one else on base. He caught the other team by surprise when he stole second base. However, Choo was stranded after Choi Jeong popped out.

Choo’s last at-bat was in the eighth inning, where he faced reliever Choi Jun-yong. He struck out at a 3-2 fastball.