The Mavs vs Heat game will take place at the American Airlines Arena. Dallas is a 1.5-point underdog with an over/under opening at 227.5. It will be a difficult assignment for the Mavericks as the Heat is picking up its pace.

Miami is currently on a four-game winning streak. Also, they won eight out of the last ten games. They are hosting Dallas Tuesday night. According to a basketball forum, Miami was at .500 before their streak. Furthermore, they moved to the sixth position in the Eastern Conference. They are ahead of the Celtics by a game. 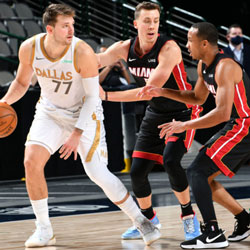 As per online sports wagering sources, Dallas lost against Sacramento in their last game. They shot six out of 35 three-point shots with a total field goal percentage of 42 percent. They missed only six out of the 31 free throw shots.

However, the Mavs allow the Kings to shoot 55.6 percent on the floor. Also, Sacramento got 27 assists, nine steals, and 38 rebounds. Luka Doncic will play a vital role in the game against Miami. His team will look for him to lead the team as they try to stop the Heat’s streak.

Miami wants to stay at the top six spot to qualify directly to the playoffs. The seventh to tenth placers will go through a play-in round. Thus, Miami will try its best to win all its remaining games. Getting the sixth spot is a positive development for the team. The team struggled in January to put them seven games under .500. At present, they are five games above .500.

Our basketball betting pick is for the Miami Heat. Dallas will not have Kristaps Porzingis. Thus, they will struggle to defend the paint. The Heat will extend their winning streak to five.