Kang scored 37 points to help the team win over Bosnia 99-66. Also, it was Korea’s first win since its victory against Mali in September 2010. Kang also had five assists, three steals, and eight rebounds. Thus, she got an efficiency valuation of 44, which broke the all-time World Cup record of 41 by Liz Cambage of Australia.

According to a sports betting site, Kang described the game as something special. The Korean star player added that not only did she break the record, but she also played a good game for her team. 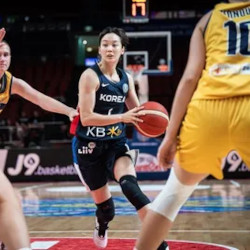 Korea played three out of the five group stage games. They lost to China in the first match 107-44 and to Belgium 84-61. In addition, Kang said that her head coach helped her find her form before the game. She added that her hand has been bothering her. However, Kang wanted to perform well in the third game of the group stage.

According to betting odds experts, coach Jung Sun-min had to field a team without Park Ji-su. The ace has been suffering from a panic attack since July. Also, Park is the only active player in the WNBA and the WKBL.

Coach Jung was worried that their landslide defeat against China would discourage the team. However, the players learned to enjoy the game. They gained confidence and played to their full potential in the game against Bosnia. Also, it was the nation’s first win in the World Cup since 2010.

Bet on basketball games with VOBET, the best sportsbook in the world!