Mobis Phoebus Shawn Long is KBL Player of the Week

Mobis Phoebus Shawn Long had an excellent performance in the last round to earn the KBL Player of the Week award. He recorded a double-double during the game against LG Saker, where he had 32 points and seventeen rebounds.

Mobis Phoebus betting fans are happy to see their favorite team retaining its second position in the Korean Basketball League. They could have been the top team if they didn’t struggle in the early part of the season. At present, the team has a record of 24-15.

KBL Player of the Week 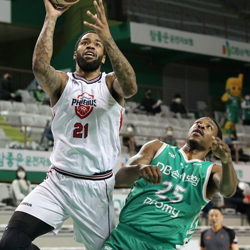 Ricardo Ratliffe of the top-ranked KCC Egis is the second-best player in round 34. The naturalized American is playing in his first year with KCC. In the last game, Ratliffe got 27 points and eleven rebounds. Also, he led the team to win over SK Knights to stay on top of the leaderboard.

If you bet on basketball, you should know the league’s current standings. KCC Egis has a record of 27-12. Although Ratliffe is a new player in the team, he immediately became one of its most dependable players. He showed how he could help the team right away.

The third-best player of the week is Lee Dae-sung from Goyang Orions. He scored 24 points and got nine assists in winning against KT Sonicboom. His team also needs to win the games to get closer to KCC Egis and Mobis Phoebus. Lee averages 15 points and nearly six assists in 39 games.