A Daegu FC player tested positive for COVID-19, according to the team’s announcement last Monday. The team said that the unnamed player tested for the coronavirus and got a positive result last Saturday.

As per the best gambling websites, it was the first time that the coronavirus had infected a player from the K League 1. Last year, A Daejeon Hana Citizen in the K League 2 suffered from COVID-19. 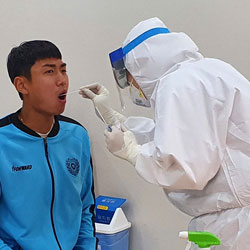 The K League 1 started its 2021 season last February 27. According to betting odds reports, the new infection case will not affect the league. Thus, Daegu FC played against Suwon Bluewings on April 21.

Daegu FC won against Suwon Bluewings, 1-0. At present, Daegu FC has three wins, four draws, and four losses. It was the team’s first winning streak this year after defeating Suwon. Also, Hwang Soon-min returned as a starter after the team placed him on the reserved list in the game against Seoul. He replaced their Ace Cesinha in the lineup.

Daegu coach Lee Byeong-geun said that Suwon also had injured players. Suwon’s midfielders were competitive, and he reminded his players to be aware of their opponent’s aggressive counter.

The first half ended with a scoreless draw as Daegu FC struggled with Suwon’s offense. Despite that, Suwon didn’t have an excellent opportunity to score. At the start of the second half, Daegu replaced Hwang Soon-min with Ahn Yong-woo. The latter scored Daegu FC’s only goal at the 72nd minute.