Barcelona tries to improve its chances to qualify for the next round of the Champions League when they host Inter Milan Wednesday night. Here is our Barcelona vs Inter football betting preview for the Group C match.

Barcelona is third in the group, with Inter in second place by three points. Inter won their last group match at San Siro last week. Thus, Barcelona wants to bounce back from the defeat with a week on Wednesday.

Barcelona failed to go out of the group stage of the Champions League last year. Also, the team is facing that same result this season after earning only three points in three games in the Group stage. According to football betting sources, Bayern Munich leads the group with six points. 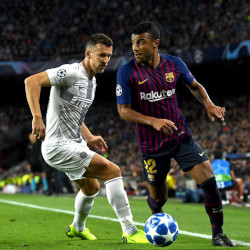 Xavi’s team started off their group stage with a 5-1 win over Viktoria Plzen on September 7. The team has lost its past two matches in the campaign, falling 2-0 at Bayern and 1-0 at San Siro. It was Hakan Calhanoglu who scored the game’s lone goal at the end of the first half.

Barcelona will know how important it is to win Wednesday’s game, and they will be glad to be back at home. They haven’t lost at Camp Nou in any competition since May. People who bet on soccer are expecting Barcelona to rebound from their defeat against Inter.

The team has struggled in the Champions League but has done well in La Liga. Sunday night’s 1-0 triumph over Celta Vigo was their eighth consecutive. 17-minute goal by Pedri.

Our soccer betting picks for the match is Barcelona to win 2-1. There is no way to downplay how important this game is. Barcelona needs all three points to improve their chances of making the knockout round. We think this will be a very close game. Inter has a good chance of winning, but Barcelona should have just enough at home to get a very important win.

Bet on Champions League games with VOBET, the best sportsbook in the world!