Yesterday, the South Korean football team had another victory on the road to the World Cup.  According to the latest football betting news, South Korea Defeats Lebanon in Asian World Cup Qualifier 2-1. The match took place on the Korean home turf at the Goyang Stadium in Goyang in the Gyeonggi Province.

For Korea, this is another win in a series of victories in the 2022 FIFA Asian World Cup Qualifying campaign. This is because out o 6 matches, they now have 5 wins and 1 draw giving them an unbeaten streak. Thus, Korean Sports betting fans are very happy with the results as they will now move to round three. 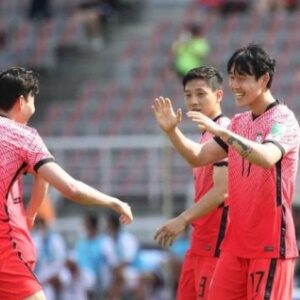 According to sports betting odds, the match had the South Korean Football team as the favorite to win. However, the first half of the game did not look good for South Korea. This is because Lebanon had an early lead with Soony Saad of Lebanon scoring during the twelfth minute.

According to iGaming Korea, the goal by Lebanon was due to a miscue on the part of South Korea. This is due to Lee Jae-Sung botching an attempt to clear the ball resulting in a loose ball. The Korean Football team came back 5 minutes later with a shot of their own. Unfortunately, it went wide right of the target.

After losing a point early in the game, South Korea was dominating the game in terms of possession. However, none of their shots could make it past the Lebanese defense.

South Korea was already moving to round three in Group H of the Asian World Cup Qualifying Round. Therefore, the outcome of the game was not that important to make it to the next round. However, they did not want to lost their last game and kept up the pressure during the second half.

Their hard work paid off and Song, the youngest South Korean player took a shot at the Lebanese goal.  Even though a goal was made for Korea, it was seen as Sabra, the goaltender scoring an own goal. Therefore, Song did not get to his first international goal.

Fifteen minute later, Son Heung-min had a penalty shot for his team and made the winning goal.