Sometimes, even public opinion and betting picks experts can be wrong about their soccer betting predictions.  Such was the case last Sunday as the sports news headline read, Sangju Sangmu FC defeats Jeonbuk Hyundai Motors. Thus, the underdog, Sangju Sangmu took the victory after scoring during the last 24 minutes leading to a 1-0 victory.

According to football news, the hero of the day for Sangju Sangmu FC is Kang Sang-woo who made the goal. Thus, thanks to his efforts, this gave the Jeonbuk Hyundai Motors FC their second loss of the season. 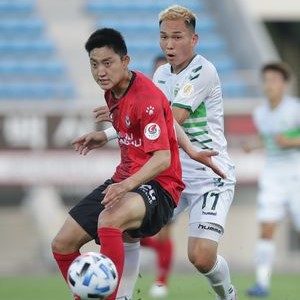 Just last week, Jeonbuk Hyundai Motors were at the top of the K League 1 ranking with a wide margin.  Unfortunately, this week they have lost most of their lead as the top team in Korean football. However, the headline that Sangju Sangmu FC defeats Jeonbuk Hyundai Motors is not the only reason. It took a combination of this loss and a victory by Ulsan Hyundai FC to dramatically shrink their lead.

Such a combination is rare to see in football.  However, for sports betting odds maker and fans, it just makes the series even more exciting!

As of this week, Jeonbuk Hyundai Motors continues to lead with 24 points.  However, Ulsan Hyundai Betting fans are happy because their team is now catching up to them with 23 points. This is all thanks to their incredible 4-1 victory over Incheon United last Saturday.

Ulsan did expect an easy win over Incheon because they have not won a match this season. Thus, Jeonbuk knew they had to defeat Sangju in order to keep their 4 points lead. However, their overconfidence led to their downfall.