Last week, the Astana Open took place for the first time as part of the 2021 ATP Tour. it was a momentous occasion for the Association of Tennis Professionals and held a special place for Korean Tennis fans. This is because yesterday, the tennis betting news headline read, Kwon Soon-woo Wins the Astana Open.

Yesterday, Kwon made history by defeating James Duckworth 7-6 (6), 6-3 in the final of the Astana Open on Sunday. Furthermore, this is the first time in over 18 years that a Korean player has won an ATP circuit event. The last time a Korean took an ATP title was in 2003 when Lee Hyung-taik won the Sydney International. 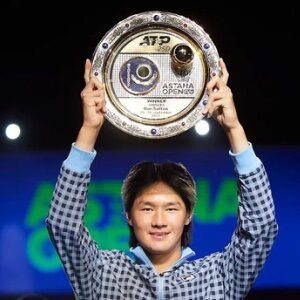 According to sports news, Kwon won the first set against Duckworth in a tiebreaker making the first set very intense. At the beginning of the set Kwon was behind 6-3. However, he was able to come by winning 5 straights for a 7-3 victory.

During the second set, Duckworth did his best to counter but was unable to route Kwon. After building a 4-2 lead, Kwon won the next game while serving. However, Duckworth came back when it came time for his serve. In the end, it was to no avail as Kwon won the last game to seal his Astana Open Victory.

Thanks to winning his first ever ATP Circuit event, Kwon now ranks 57 in the world. According to sports forums, he went up 25 paces as he was number 69 just a week ago. In Asian tennis ranking, Kwon now ranks second after Japanese player, Kei Nishikori. The highest-ranking position by a Korean player, was by Chung Hyun who was no. 19 in 2018.

Kwon is now in California to compete in the San Diego Open which runs from September 27 thru October third. According to sports betting odds websites, he will be competing for a $600,000 prize against the top tennis players.

Bet on Tennis with VOBET, the best tennis betting website